With Spring Training having begun on Sunday, baseball is officially back. While many may ignore these ostensibly exhibition games, I choose to view these games as opportunities for players to prove themselves worthy of making the big-league roster. The Braves are in a unique position; we are in a World Series window, and we can surely compete with any team in the league, but we still have an incredible amount of depth at the minor league level. Bleacher Report ranked the Braves’ farm system as the 5th best in baseball, an unprecedented level for a team that has won 3 consecutive division titles. That being said, we have plenty of minor league players hoping to prove themselves this Spring Training to get a crack at “the show” and help the Braves compete for a World Series. 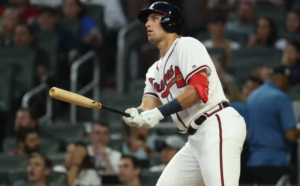 Austin Riley will definitely be on the big-league roster to begin the season, there is no doubt in my mind. However, he is on thin ice in general, as he needs a great season to keep his spot on a team that is looking to win a World Series. His first two years on the Braves have not been ideal, as he holds a strikeout percentage at 31.2%, and has not yet had a season in which he produced a WRC+ at the league average level of 100. That being said, he certainly has not failed in his shot at stardom; he has only played in 131 games with the shortened 2020 season. Riley will have a shot in 2021, but he needs to make the most of it, and it is worth watching if he starts proving the doubters wrong as early as Spring Training. 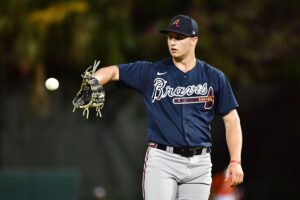 Image Copyright: Julio Aguilar/Getty Images
The Braves have already lost beloved reliever Mark Melancon, and former all star Shane Greene is currently unsigned as well. That being said, the Braves could use some bullpen help, and why not look to acquire it internally through their farm system? Prospects1500 ranks Davidson as the Braves 9th best prospect. His MLB debut was rough, but 2020 was a rough year, and not facing any minor league competition since 2019 definitely did not help Davidson. However, in his 2019 season across AA ad AAA, he had a stellar ERA of 2.15, while striking out 9.3 batters per 9 innings. If he can put up similar numbers in spring training, Davidson could earn himself a spot in the Braves’ bullpen and contribute to the team’s success as early as this season.
4. Jason Kipnis 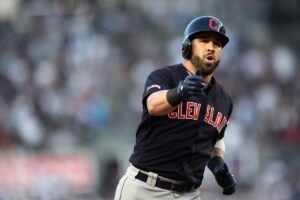 The Braves are in dire need of a quality bench bat; this fact is only reinforced by the removal of the DH and hence the need for pinch hitters. Kipnis, a former 2 time all star who boasts a career WRC+ of 103, per FanGraphs. However, entering his age 33 season, he is not the same player he used to be. According to Baseball Savant only ranking in the 12th percentile for Exit Velocity, 13th Hard Hit Percentage, while playing poor defense, ranking in the 6th percentile in Outs Above Average. Although he is not the player that he used to be, he provides us with a solid bench bat option with a very high ceiling, as he may still have some left in the tank. It is worth watching how he performs this Spring Training as an indicator of what he could provide the Braves With this Season.
3. Alex Jackson, Wilson Contreras, Shea Langeliers 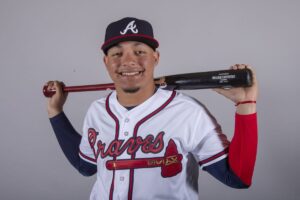 I coupled these three together because they are all battling for the backup catcher position. With Tyler Flowers remaining in Free Agency, there is a vacancy at the backup catcher position that the braves will fill internally. Jackson will most likely win the job, as he has played in the Braves system the longest. However, he has only played in 10 MLB games, with an astonishingly low OPS+ of -13. William Contreras, brother of All-Star Cubs Catcher Wilson Contreras, certainly has a higher ceiling than Jackson, but other than the 4 games he played when both Flowers and D’Arnaud were feeling under the weather, he has not played beyond the double A level. Shea Langeliers, our 2018 first round pick from Baylor, is also worth watching. He has only played 54 minor league games, all at the A level, so he probably will not reach the MLB this year, but he is ranked as the Braves 7th best prospect by Prospects1500, and certainly appears to be the catcher of the future, and his performance is worth watching this spring. If I had to predict who would win the job, I would say Alex Jackson will start the season on the big league roster as the backup catcher, and William Contreras will take his job at some point during the season.
2. Drew Waters 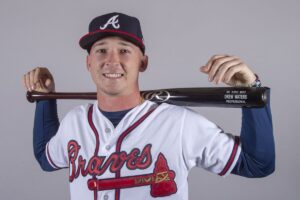 Drew Waters is an intriguing prospect, ranked as the 35th best prospect in all of baseball by MLB Pipeline. In his Minor League Career, he has done nothing but rake at the plate, posting an OPS over .800, and his overall prospect grade is a 55/60, denoting the elite caliber prospect that he is. With no universal DH, the outfield looks to be crowded for this year, but I think he may be called up in September when they expand the major league roster. However, Braves country hopes a piece of our outfield for years to come. He is our most highly touted prospect who has not reached the MLB level, and is definitely worth watching during Spring Training, even if he is not poised to make an impact for the Braves immediately this season. However, with a player of his caliber, I wouldn’t be surprised if he exceeds expectations and finds his way into the lineup, and the performance required of him to earn his spot starts right here in the Grapefruit League.
1. Kyle Wright 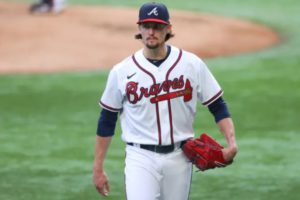 Image Copyright: Ronald Martinez/Getty Images.
Kyle Wright, taken in the top 5 by the Braves in the 2017 MLB draft, has had lofty expectations thrown his way. While he did not necessarily live up to the hype immediately, he began to produce in for the Braves in 2020. In his final 3 starts of the season, he allowed just 5 earned runs in 19 innings, good for an era of 2.37, in addition to a playoff start against the Marlins where more batters struck out against him (7) than reached base (5) in 6 scoreless innings. However, his NLCS start against the Dodgers did not continue this trend, as he allowed 7 earned runs in just two thirds of an inning, an inning which the Dodgers broke the playoff record for most runs in an inning. The very next day, fellow Bryse Wilson had his greatest career start, and since then, there has been a debate about which pitcher will earn a spot in the rotation. Personally, I think both will start multiple games this year, especially with Mike Soroka beginning the season on the injured list. However, Kyle Wright needs to have a good spring to cement himself into the starting rotation and become the pitcher that he was hyped to be during his days at Vanderbilt.

Another Quarterfinal Knockout for Atlanta United in CCL

Trae Young Becomes Frustrated The Solution Is In House