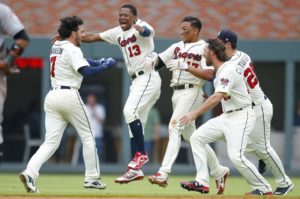 In recent history, the Braves have not had a good lineup when coming to the plate. The biggest problem was filling out the lineup one through eight. Although Freddie Freeman was a mainstay in the third hole, the other seven spots would change on an almost nightly basis. There were even games when the pitcher would bat eighth and the likes of Mallex Smith or Ender Inciarte would bat ninth to be the ‘second leadoff man.’ The biggest problem with the Braves lineup construction has been that many of the hitters have been the same type of guy at the plate. A low power, line drive contact hitter.

The 2018 season was different. Ronald Acuna Jr. got called up in late April and was moved to the leadoff spot the in order in July. He was the spark the lineup had been missing for years. In the first half of the season, Ozzie Albies was hitting first or second and was playing very well from both sides of the plate. Freddie Freeman was his usual self. A hitting third third baseman who earned the starting first base position for the National League All-Stars.  Joining Freddie in the All-Star Game was Nick Markakis, finally achieving this feat after 13 seasons in MLB. He did not have the power of a traditional cleanup hitter, but he hit .297 and added 14 homeruns, while playing in every game. After that however, the lineup looked much the same as previous years. The catcher position provided some pop, with Kurt Suzuki and Tyler Flowers splitting time. Suzuki, however, left in free agency to the Nationals. The rest of the lineup is filled by great defensive players with low power numbers thus far in their careers.

As for 2019, the moves that Alex Anthopoulos have made so far have been to fill out the lineup. Currently, the Braves have one of the best top three hitting rosters in baseball with Acuna, Donaldson, and Freeman hitting one, two, and three respectively. After that, its much like last season. Albies hopes to get back on track and hit at an All-Star caliber. Dansby Swanson hopes to improve his offensive game while maintaining his great defense at shortstop. Inciarte will continue his Gold Glove caliber defense in centerfield but counting on his bat has been a mistake in the past.

Currently, there are two positions that the Braves need to fill. One for a catcher and a corner outfield spot. Both positions do not have very many power hitting options available this year. Unfortunately, that is exactly what Anthopoulos want and the Braves need. There are however a couple of players that the Braves have in mind for the upcoming season. There has been a lot of speculation that the Braves will offer a one-year contract to A.J. Pollock as a ‘prove it’ deal to see if he can stay healthy for an entire season. One of the best remaining outfield options on the open market would be a huge get for this team, especially for the lineup construction. Pollock is a career .280 hitter and had 21 homeruns last year in only 113 games. Unfortunately, the major concern about him is his ability to remain healthy for an entire season. He would fit nicely into the five spot and provide protection for the top half of the lineup.

A player that has been linked to the Braves for about a year has been J.T. Realmuto, the catcher from the Marlins. Many fans would love to see this happen but the asking price from Miami has been too steep. Recently, many believe that price has come down and talks have reopened. While the offer would cost many prospects, the Braves are one of the few teams that can give that up. Realmuto still has two years of team control remaining and he was one of the best all around catchers in baseball last season. He hit .277, had an OPS of .825, the highest of any catcher in 2018, and hit 21 homeruns. Half of those came in one of the biggest ballparks to hit in. Not bad for the 27 year old. He would be a great addition into the cleanup role for this team, creating one of the best lineups in baseball, all while giving up pitching prospects that cannot help the team win in 2019.

Both acquisitions would vastly improve and fill out the roster. In addition, adding these two players allows for a deeper bench if needed, or an additional bullpen arm due to the firepower the offense can create. These moves will greatly improve the team for 2019 and beyond, as well as not damage the farm system as there are so many pitchers knocking on the major league door there is no way the Braves can keep all of them. Overall, both players would be a great benefit to the lineup for years to come. In addition, they would remain within the budget ownership has set on the front office.

ByAuthor Mario JordanPosted on July 16, 2019July 16, 2019
2718
After a long wait for trade referendums, waiting periods no one understands and whirlwind trade activity the dust is starting to settle. The Atlanta...

An Outlook of the Braves Outfield for 2021