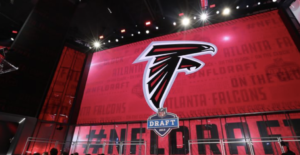 The 2021 NFL Draft Class features the most quarterback talent seen in recent memory.  This ultimately can benefit teams in need of a franchise quarterback and teams who are picking early but may not necessarily need a quarterback quite yet, such as the Falcons.  Atlanta currently owns the fourth overall pick, and there have been rumors about the team potentially trading back in the draft. The likely of draft capital the team would acquire with a potential trade back can help Arthur Smith and Terry Fontenot identify and fill the many holes this team has.  This article will discuss both the possibilities of staying put or trading back.

The first option for the Falcons is, of course, to stay put at the fourth spot.  This would give the Falcons a large variety of talent to choose from.  Atlanta could decide to draft their quarterback of the future, whether it be Justin Fields, Trey Lance, or even Mac Jones.  They could also take Penei Sewell to provide a boost to the offensive line.  Smith and Fontenot could even draft Kyle Pitts, who’s considered by many to be a generational talent at Tight End.  Each of these would ultimately be considered ideal for Atlanta.  If they draft a quarterback, they will not have to worry about replacing Matt Ryan, who is on the tail end of his career.  Drafting Sewell would provide a much-needed boost at the Tackle position where he could play alongside Jake Matthews.  Finally, Drafting Pitts would add yet another dangerous weapon to an offense that already has plenty.

The second option is for the Falcons to trade back.  Although the Falcons will more than likely end up not getting the future franchise quarterback many fans may want, they could acquire valuable draft capital from a QB-needy team, such as Washington or Chicago.  Trading back would also help the Falcons pick a player a position of need instead of reaching for that player at four.  Considering that Miami was able to acquire three first round picks from San Francisco in a blockbuster deal this past weekend, this could potentially set the market price for the Falcons if they wish to make a move.

So what are your thoughts Falcons fans?  Do we stay put or trade back? Let’s hear it in the comments.

Cristian Pache and the expectations of young MLB players