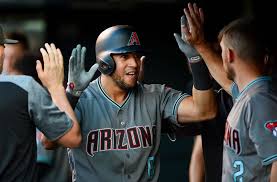 The 2018 Braves success came as a shock to many. A big factor of their fortune came from their 34-year old right fielder, Nick Markakis. Markakis, like the Braves, was not expected to have the season he did. However, this did not stop Nick from having a career year where he won a Gold Glove, Silver Slugger and was selected to his first-career All-Star game. Markakis, now a free-agent, has surely grabbed multiple teams attention for 2019. Yet, the Atlanta Braves are not looking to keep the right-fielder. Instead, the Braves look to use their small payroll to accommodate a new, more talented outfielder.

The Case for Peralta

31-year old David Peralta is a slugging corner outfielder who currently plays for the Arizona Diamondbacks. Peralta is one of the unseen power bats who quietly puts up better stats than many other players like him. In 2018, Peralta slashed .293/.352/.516 with 30 HRs and an OPS+ of 124. In comparison to Markakis’ 2018 stats, .297/.366/.440 with 14 HRs and an OPS+ of 117. It’s certain that Peralta carries the same productivity while adding much more power to the already strong Braves’ lineup.

Peralta has spent 4 years in the majors and isn’t a FA until 2021; surely enough control to be a long term option. In the field, there is no loss of ability either. Peralta had 6 DRS (Defensive Runs Saved) last season in all OF positions. Markakis only had 3 DRS last season while winning a Gold Glove. Peralta was also 3rd in the National League last year in least amount of errors committed (4). Peralta is a great, undervalued star that could bolster this Atlanta lineup. Atlanta would have one of the best four bats in the game all hit 1-4 (Peralta likely being the clean-up hitter).

The Arizona Diamondbacks have fully accepted a rebuild by trading their star first-baseman, Paul Goldschmidt. This opens the door wide open for Atlanta to ask about Peralta. The 31-year old will not be around for the aftermath of the D-Backs rebuild which only furthers the Braves pursuit. The return for Paul Goldschmidt in their trade with the Cardinals was one that could’ve been much better for Arizona. The D-Backs acquired 25-yr old SP, Luke Weaver – 24-yr old Catcher, Carson Kelly – and a 2019 Composition pick. Weaver sported a 4.95 ERA in the bigs last year while, Kelly only played 19-games in the majors last year with a line of .114/.205/.114 . However, Kelly is mostly known for his defensive ability behind the plate. A mildly impressive return like this for the face of the franchise shows that Arizona is not going to be asking a lot for Peralta. Loaded with multiple top prospects, the Bravos could easily make an agreement for David Peralta with possibly not giving up any of the big names.

Who Are the Braves' Remaining Offseason Targets?

Hawks Get Much Needed Win in Miami

What the Addition of Aari McDonald Means for the Atlanta Dream

Atlanta Hawks: Push for the Playoffs