With one of the most American competitions all year happening today, it’s time to determine which Atlanta Falcon would win a hot dog eating contest. Alex Mack, Jamon Brown, rookie Kaleb McGary and one more surprise player who loves to EAT.  10 minutes on the clock, who ya got? 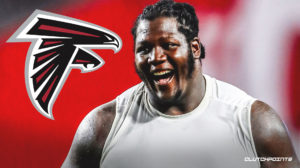 Jamon Brown: At 6’4, 340 pounds, Jamon may not be the tallest, but he is the heaviest player on the Falcons. Brown could handle a pound of dogs easy. The newly acquired Falcon guard is a big man, you might say the number of hot dogs he could eat is GIANT, like his former team.He’s comfortable under the big lights and could surely RAM the competition if drafted to compete. If the bad puns don’t gird your gullets, just look at the size of the man! 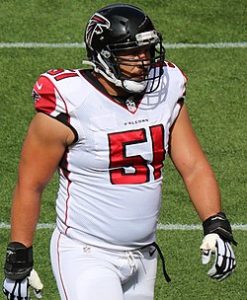 Alex Mack: Mack is 6’4, 311 pounds of absolute consistency. I believe this would prove to be a valuable trait in the 10 minute hot dog how down. To win a contest such as this, you must be able to fight through the pain, which is another thing Mack does well. Since he’s joined Atlanta, Mack has not missed a start; you’d have to go back to 2014 where he still wore a Browns jersey to find his last missed game. Needless to say, Mack would be a force on the hot dog eating stage. 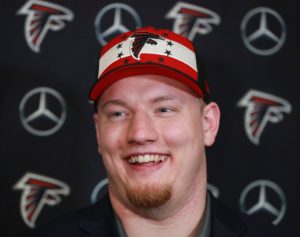 Kaleb McGary: At 6’6, 306 McGary is the tallest participant in this competition. Whether that is valuable is unknown, but what is known is that Dan Quinn drafted Kaleb for his grit on the field. He’s not all that lean, but he is most definitely mean! This grit and toughness could transition beautifully to a vicious eating style. A plate of hot dogs that placed in front of McGary wouldn’t stand a chance. This country strong 1st rounder may even give the all mighty Joey Chestnut’s record a run for its money. 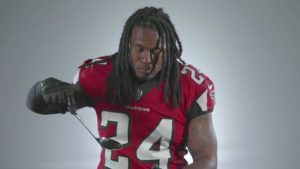 Devonta Freeman: EAT FREE EAT! We are all familiar with this phrase, but can Devonta walk the walk? Entering the competition at 5’8 and 208 pounds, Freeman is the contest’s’ under(hot)dog. Freeman is up against some big men and may be biting off more than he can chew! With the 10 minute clock, Devonta’s stamina against the 300+ pounders may prove to aBUNdantly important. Freeman will truly have to grind this out to the finish.

What do you think Falcon Fans, who wins and why? Is the true winner not even in the competition? Can Freeman pull out an upset? Vote and comment with your predictions!

2021 is a Boom or Bust Year for Austin Riley

ByAuthor Bradley FriedrichPosted on February 26, 2021February 26, 2021
337
Image Copyright: Adam Hagy, 2020. Last season came to a disappointing end, but it represents a lot of optimism resonating within Braves country. We...

Freeman has career milestone in win vs Brewers