A breakdown of Atlanta Falcons 6th round pick from Yale. 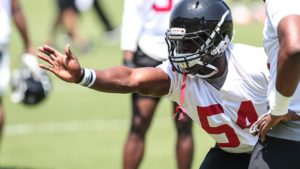 Today’s roster focus highlights Atlanta Falcons rookie linebacker Foyesade Oloukun, a player which I’m excited to watch. If you haven’t heard about Foyesade Oluokun no one will blame you. He played in the Ivy League at Yale University and wasn’t invited to the combine. Instead, he attended an Ivy League Pro Day at Fordham University. His performance warranted enough attention that the Falcons moved up in the 6th round to pick him as the 200th overall pick.

As you can see, Foye fits Coach Quinn’s mold of the linebacker he is looking for. While at Yale, Foye played a mix of safety and linebacker. Sound familiar? In 2016, many had Deion Jones pegged as a linebacker/safety hybrid player. As it turns out Quinn saw a player he wanted to mold into one of the best middle linebackers in the game. Now imagine if you will, you have two of those players with similar traits. Oluokun’s measurables are very similar to Jones with Oluokun being just a little bigger. That makes a scary thought for offensive coordinators around the league. I have to temper my excitement because, yes, he is just a rookie, but Coach Quinn has a knack for getting the most out of his players and if he can tap into Foye’s potential, then only some greater power can help opposing offenses.

If you watched the Jets vs. Falcons preseason game this week, you probably have downed a fifth of whatever you were drinking because it was pretty forgettable. While they were many low parts to the game, (Duke Riley, penalties, and the new helmet rule as gaudy as it is interpreted) Foye had a good game. In fact, he was rated as the best Falcons defender with a rating of 77.1 by PFF. Yes, it’s preseason, and he was going against the 2nd, 3rd team offenses and possibly part-time waterboys. However, it does bode well for him considering the level of competition he faced at Yale and facing players who do have some experience in the NFL and played at schools who had a stronger football program. It also helps his case as Duke Riley was the Falcons 2nd worst defender according to PFF with a grade at 30.1.

The Falcons hope that Duke can put it together, but if he can’t the Falcons have a potential difference maker as an insurance policy. Thomas Dimitroff and Coach Quinn have been known to catch a diamond in the rough (Brian Poole, De’Vondre Campbell and now looks like Damontae Kazee). If all goes well, we could see Oluokun, Jones and Campbell all on the field at once. Our very own three-headed monster of the apocalypse. Ok Derek, calm down. It’s just preseason.

For Foyesade Oluokun college highlights and getting excited like I am visit: https://www.youtube.com/watch?v=rRSu-306hcE

Rising Up Since Childhood: The story of how I became bald